Once upon a time there was two mermaids, but they don't have names, because their names are just nothing.  They are just mermaids.  They just swim.  They can't think about their names yet, because they just want to be like that way.  Underwater they saw a golden and pink egg.  It was under the water through the tunnels and the sea.  Then a shark came by and tried to swim after it.  The mermaids just swimmed away.  The shark went in a net and he tried to bite a little humming bird, because he likes the birds that fly but he only lives underwater because he doesn't want any family.  So we have to stay away from him.  Then a rainbow comed out of the sky and flowers grew by the houses.  (Don't forget this part - making shark biting gestures with fingers).  The mermaids came back and found their friends.  They swimmed back to their castle, but the shark came after them.  He tried to get in the mermaid's castle.  They threw a big trap out of their window and caught the shark.  Then they went back to the golden and pink egg.  It was a baby mermaid.  The End. 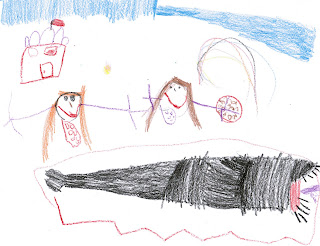 Dictated and Illustrated by a 3-year old girl.

Posted by Byrne Publishing LLC at 6:27 AM