Once a pont a time, there was a crown.  There was a million of girls and there were two boys.  The crown set on a shelf, and the house hadded a bell on the house, and when they ring the bell they open the door to get in the house.  One day, a egg was in the nest on the tree.  The tree was yellow and green.  And the other tree is yellow.  Once there was a lot of storming, so that’s why they hurried inside.  Then Emily growed taller when she was five.  She hadded a six-year birthday.  There was a lot of thunder and they keeped going inside.  The two flowers growed and growed and they were bigger than the moon.  (The moon is not there yet because it is not night).  The egg bumped and bumped and rolled out of the nest.  The nest was zero things--nothing was in it.  The little baby bird comed out and he could fly.  That’s why he was this little and flied.  He flied this high (flapping wings).  Grandma knocked on the door and ringed the bell and walked inside.  Then she saw all of her children and said, “Oh Emily, you are getting so big!”  The End. 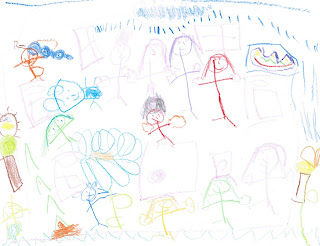 Dictated and illustrated by a 3 year old girl.
Posted by Byrne Publishing LLC at 12:13 PM